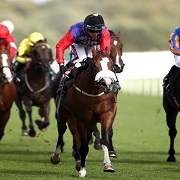 Another big sales race for two-year-olds means another valuable pot and this will be the race’s 14th edition.

The Goffs UK Premier Yearling Stakes at York’s Ebor Festival won by Happy Romance who beat the slow-starting favourite, Devious Company, into second has featured four of the last 11 winners. Not so for the last three seasons but two those winners, Laugh A Minute and The Great Heir, also ran at the Ebor meeting finishing third in the Convivial Maiden and fifth in the nursery so the whole meeting should be considered closely.

These sales races attract a wide range of abilities and are not as open as may first appear so tend to go to horses that have shown a strong piece of form in relation to their rivals so how the Aidan O’Brien-trained Reply, who was officially top rated heading into the 2011 renewal, was allowed to start at 20/1 before his victory remains a mystery.

Staying on that theme, Dream Eater was also top-rated on official figures when winning the inaugural running in 2007, the top-rated Taajub only found one too good in 2009, the two form horses on official figures in 2010 year fought it out with Wootton Bassett beating Galtymore Lad in a repeat of their 1-2 in the Goffs Premier Yearling Stakes at the Ebor Meeting, in 2012 the second-top rated on official BHA figures, The Gold Cheongsam, justified favouritism, three of the four top-rated horses heading into the 2015 renewal went on to finish 1-2-3 and the 2016 winner, Mubtasim, was second top-rated.

Richard Fahey supplied the winner, third and fifth in 2010 and the 2014 winner, Bond’s Girl, so he is likely to target the race again.