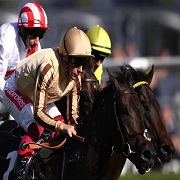 Given that five of the last 11 winners of the Flying Childers never even raced as three-year-olds, and five of the other six never won at three (last season’s winner, A’Ali, being the exception), we can be excused for concentrating on what we believe to be out-and-out two-year-olds for this test of raw speed over 5f.

The most recent trend to note is a big one as the last four winners all won over 5f at Royal Ascot. Ardad and Soldier’s Call won the Windsor Castle, Heartache completed the Queen Mary-Flying Childers double and A’Ali did likewise in the colt’s equivalent by winning the Norfolk at Royal Ascot. With regards to the Norfolk won this season by The Lir Jet, Sheer Viking (2nd in 1998), Superstar Leo (1st in 2000), Zebedee (5th in 2010) and Green Door (7th in 2013) also came on to win here.

Like the equivalent two-year-old race at Glorious Goodwood over 5f, the Molecomb Stakes, the Flying Childers has historically been a good race for fillies with ten wins in the last 28 years which is a decent return given the extent to which they have been outnumbered over that period of time.

With regards to the Molecomb won by Steel Bull, three of its last 13 winners went on to add the Flying Childers (Fleeting Spirit, Zebedee and Requinto) and Cotai Gory was certainly going to make that four in 2014 but for unseating his rider with 50 yards to race when clear letting in the Molecomb third, Beacon, to take the spoils. The 1993, 1995 and 2006 Flying Childers winners finished second in the Molecomb and in 2018 Soldier’s Call was third before coming on to win here having won a Group 3 in France in between.

The Gimcrack Stakes won by Minzaal is also a guide worth noting but the winner looks set to stay at 6f. Ardad was only seventh of eight in the 2017 Gimcrack but appreciated the step back down to 5f to win here and others defeated in the Gimcrack to win the Flying Childers since 1996 were Easycall, Sheer Viking, Saddad, Wi Dud and Beacon, so don’t rule out beaten contenders from York dropping down in trip.

The Weatherbys Super Sprint won by Happy Romance who went on to win another big sales race at York, has been another notable guide featuring four winners since 2000 notably Superstar Leo who completed the double.

Experience has been key with just four of the last 27 winners not having run at least four times previously so last-time-out flashy maiden/novice winners can be taken on. In fact, 13 of those 27 winners had run on a minimum of five occasions beforehand (and four of the last ten winners were having their seventh start of the campaign here no less) which is a highly unusual profile for a winner of a two-year-old Group 2 race.

Since 1994, four trainers have won this event more than once; Kevin Ryan, Richard Hannon Snr, Richard Hannon Jnr and Sir Michael Stoute who has saddled five winners in total including the top class pair of Marwell (1980) and Green Desert (1985) but has only saddled three runners since 1994 yet two of those won (Raah Algaaarb and Saddad) after having both run at the York Ebor Meeting.

The Hannon stable have won this race on six occasions (Cayman Kai, Godfrey Street, Zebedee, Sir Prancealot, Beacon and Gutaifan), the last pair for Hannon Jnr as was the 2018 season’s runner-up. Michael Bell is another name to consider as he has had three placed juveniles in the last 16 years from four runners.