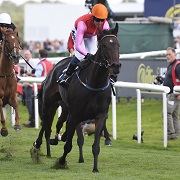 Named after a filly that remains the only horse to have won four British Classics outright, the Sceptre Stakes was upgraded to Group 3 status in 2011. Nine of the last 19 winners started at no bigger than 4/1 but we had a 20/1 surprise last season when Breathtaking Look took a successful step up in class from handicaps.

Understandably there has been an improvement in the standard of winners in recent seasons given the incentives brought in to keep fillies in training around a decade ago so Group-race form has been coming to the fore and ten of the last 12 winners ran at Group or Listed level last time out unlike the majority of years following the turn of the century.

The Classic generation make up over half the field but a statistic that is hard to ignore is that 3yos have won 29 of the last 37 runnings including ten on the trot until the 4yo Spangled won at 14/1 three years ago busting a few trends in the process. The upgrade to Group 3 status was to encourage higher representation from older fillies and mares in line with other all-aged distaff races following the European Pattern Committee’s policy to upgrade races to tempt owners to keep older fillies and mares in training for longer so therefore it is surprising that three-year-olds continue to dominate.

Having not long been upgraded from a Listed race, the Sceptre Stakes had previously witnessed little interest from Ireland but John Oxx’s Alanza made a successful trip over on its first rendition as a Group 3 race giving them their first winner of this race since it was first run in 1982. The recently-retired Luca Cumani won that inaugural running and has added three more victories since and is two wins clear of Sir Michael Stoute and Mick Channon.