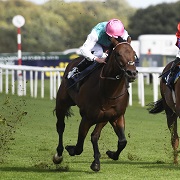 A Listed race this 5f sprint may be but four of the last nine winners have gone on to win a Nunthorpe; Sole Power, Jwala and Mecca’s Angel (x2), plus the 2016 winner, Priceless, went on to win the Temple Stakes and the 2015 and 2019 Charlie Hills-trained winners, Cotai Glory and Equilateral, went on to finish second in the Group 1 King’s Stand Stakes. Purely on that basis, there has to be an argument that this is the best Listed race run throughout the season.

The Scarbrough Stakes had formerly been a very poor race for the younger brigade of sprinters in terms of winners with just the three-year-old, Flanders, winning from 66 contenders aged two or three in the 20 years prior to 2014 but not anymore as Mecca’s Angel, Cotai Glory and Priceless won consecutive runnings for the three-year-old generation. In addition, Spin Cycle, Rose Blossom, Dinkum Diamond, Jwala and Razzmatazz all finishing second for the Classic generation recently too.

Previous form in this race is worth noting. For example, Galeota was winning this race for the second year in succession in 2008 thus emulating another Hannon-trained sprinter in Notley who won this contest in 1991-1992. Celtic Mill was also a dual winner taking this prize in 2004 and 2006 whilst Bishop’s Court ran well in this race on a few occasions including when winning in 2002 and Encore d’Or has won and placed recently so respect those to have run well in this contest in a previous year. Filling the next three places behind Equilateral last season were Queen’s Gift, Duke Of Firenze and Tis Marvellous.

By and large it has paid to race very close to the pace with five of the last 21 winners making all (or made virtually all) and another ten winners raced directly behind the early pace so beware the confirmed hold-up performer.

With just two winners sent off at any bigger than 8/1 in the last 23 years, this is also a race that we can tackle with a degree of confidence and 15 of the last 22 winners emerged from the 4/1-8/1 SP bracket.

As we’ve seen from Charlie Hills’s two recent winners plus Robert Cowell has trained three winners going back to 2010, the southern yards have enjoyed their successes but the home team has put up a stout defence and have won seven of the last 23 runnings. Tim Easterby has collected the prize twice in that period, both times with fillies and Mecca’s Angel and Priceless were other successful fillies in the last five years. The very popular flying filly, Soba, also took this prize back in 1983.