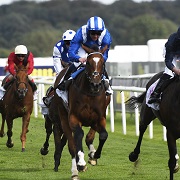 A Group 2 race for fillies and mares over the St Leger trip, Ralph Beckett has trained two of the four winners (and also saddled the 2018 third for good measure) underling what a fine trainer he is of fillies and mares. Following Luca Cumani’s retirement, now leading the way of current-day handlers with four successes is Sir Michael Stoute.

Of the Irish-based trainers, Aidan O’Brien has yet to record a winner (but his Delphinia was beaten a short-head last year) but John Oxx has been responsible for two seconds, a third and a fourth with his last four runners stretching back to 2001.

Older fillies and mares are 11-5 up since 2004 and 4yos are chasing a fifth consecutive victory. Only two mares aged 5+ have won since the race was opened up to elders in 1991 but it is hard to treat that as a negative particularly as they would also be comprehensively outnumbered.

With regards to three-year-olds, The Lark became the third Oaks runner to win since 2006 (Rising Cross and The Miniver Rose being the others) during the same season to have contested the Oaks when going two places better than at Epsom. As for the Ribblesdale Stakes, four fillies that finished in the first four in that Royal Ascot Group 2 prize in the last 27 years went on to win here.

As for the older fillies and mares, the Lillie Langtry Stakes at Glorious Goodwood has been their (and the race’s) best guide with five winners of that Group 3 race doubling up here – Enbihaar being the latest last season. God Given was also fourth at Goodwood before winning here last season and the 2015 Lillie Langtry was won by Simple Verse who won the St Leger instead or that would surely have been six. A year later she then contested the Park Hill as a four-year-old and took the honours. Enbihaar beat two rivals (Cabaletta and Snow) to also win this season’s Lillie Langtry and looks set to tackle Group 1 company next.

Over a longer period of time, we must also respect the Sir Henry Cecil & EBF Galtres Stakes with five winners in the last 25 years (all finished in the first four at the Ebor Meeting) and this season was won by Gold Wand who beat Vivionn and Award Scheme.

The Lancashire Oaks, won this season by Manuela de Vega, featured the 2019 Park Hill 1-2 with God Given reversing Haydock placings with Horseplay. Six Park Hill winners since 1992 posted a top-five finish in that Group 2 event at Haydock. Also-rans from the Yorkshire Oaks must also be considered dropping down in class as six of the last 25 Park Hill winners ran in that Group 1 event on the Knavesmire and all six finished unplaced.