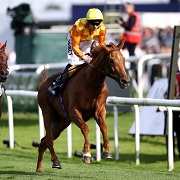 Jamie Spencer was notching up his fifth Mallard Handicap victory last season on Sleeping Lion in an uncharacteristically small field of just six.

What was a fantastic staying handicap for the Classic generation between 1994-2001, where they won all bar one renewal, has levelled out of late with older horses winning nine of the last 18 runnings, though they do represent far greater representation so trends backers will still be looking to three-year-olds, of which there were none last year. The score over the last 29 years is 15-14 in favour of the three-year-olds from approximately one-third of the total runners so they should be our statistical first port of call.

Two perfect examples would be the 2017 and 2018 runnings as Wall Of Fire and Time To Study (Mark Johnston) were the only three-year-old representatives and both justified favouritism. From just two runners in 2018, three-year-olds supplied the runner-up beaten a head (Johnston again) and three-year-olds were responsible for just one runner in 2012 and Sir Graham Wade also justified favouritism for a certain Mark Johnston. Seven years ago their two representatives finished second and third. The previous occasion when a three-year-old was successful was in 2008 despite them being responsible for just two of the 16 runners.

With three-year-olds faring so strongly, notably those trained by Mark Johnston who also has a great record with three-year-olds in another staying prize, the Brown Jack at Ascot, it is no surprise that the Melrose Handicap at York (a 3yo handicap over 1m6f at the Ebor Meeting) should figure prominently as a key guide. Indeed, six of the last 11 three-year-old winners of the Mallard ran in the Melrose, five of which either won or finished second at York, so pay very close attention to the principals from that handicap won by Coltrane which looked ultra-strong this season with so many in-form, progressive stayers.

When you think staying handicaps, certain trainers instantly spring to mind and Mark Johnston more than most. Successful in 1998 with Spirit Of Love and three years later with Darasim, the Scot also filled two of the four place positions eight years ago in addition to the heavily-punted, three-year-old winners in 2012 and 2017 and a four-year-old runner-up last season.

As far as the older horses are concerned, the Ebor has been the most illuminating guide as Nanton, Sendintank and Corradini all ran well in Europe’s most valuable staying handicap before winning here in the not too distant past (as did the 2016 runner-up, Seamour), so if you want to take on the three-year-olds, the Ebor has been a fair place to start. York Ebor Meeting form in general actually as the 2015 and 2019 winners, Curbyourenthusiasm and Sleeping Lion, contested the 1m4f and 2m handicaps respectively.

Other stats to note are that 17 of the last 27 winners were sent off favourite or second-favourite which is an extremely healthy strike rate for a competitive handicap and 18 of those winners had won a handicap earlier in the season.

Negatives
Failed to win a handicap earlier in the season