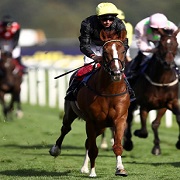 A horse starting in the first three in the betting has won the Doncaster Cup for the last 18 years (one of which dead-heated with a 14/1 shot) so punters have enjoyed a good time of it and particularly punters who sided with a contender in the top three in the market that ran in the Lonsdale Cup at the York Ebor Festival won by Enbihaar.

The Ascot Gold Cup is the second-best guide as ten of the last 24 Doncaster Cup winners took their chance at the Royal Meeting over an extra quarter-mile but found this Grade-lower contest over a shorter distance more to their liking, though I would only argue that is par for the course. More interesting is that class has shone through more often than not of late with 15 of the last 24 winners having won a Group 2 race or better earlier in the career so many winners were defying a penalty.

Stradivarius outclassed his rivals as a five-year-old last season at the age of five but the previous year’s 1-2-3 were aged 8, 8 and 9. Older stayers have really come to the fore in recent seasons with five seven-year-olds (Times Up, Sergeant Cecil, Boreas, Millenary and Sheikhzayedroad), two eight-year-olds (Millenary again and Thomas Hobson) and Persian Punch at the age of ten winning the Doncaster Cup since 2003 and, moreover, three of the last 11 runnings have been won by six-year-olds (Samuel, Times Up and Pallasator). Compare that to the wretched record of horses aged over six in the Ascot Gold Cup until the Yeats era.

Alleluia, Saddler’s Rock and Desert Skyline have won the Doncaster Cup aged three since Weld back in 1989 (and 18 since 1900) but they have hardly been laden with runners and have actually fared very well with those that have taken their chance which also includes two seconds and two thirds from just 11 contenders going back to 1989.

The Irish have won four times from few runners since 2007 and in 2018 the Mullins-Ricci pair of Thomas Hobson and Max Dynamite finished 1-2. Maybe Mullins will send over his strong-finishing Lonsdale Cup runner-up, Stratum, who being a Cesarewitch winner he has already won a big prize over this trip of 2m2f and shaped at York like the extra quarter-mile would be in his favour. Aidan O’Brien has saddled two winners and a runner-up from his five runners. He may not have the firepower of a few years ago but also note John Oxx if he sends one over having won this prize with Enzeli in 2000 before Saddler’s Rock’s success eight years ago.

Surprisingly given their many successes in other Cup races, Godolphin have yet to win the Doncaster Cup but just five runners in the last 18 years goes a long way to explaining why.

Negatives
Outside the first three in the betting