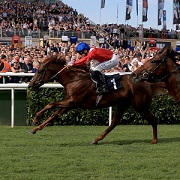 Just one winner in the last 23 years has been sent off at bigger than 8/1 and the biggest priced winner in the race’s near 200-year history (first run in 1823) was a 20/1 shot so stick to the leading fancies.

It used to be a case of favouring last-time-out maiden winners (eight winners between 1999-2016) over Group-race winners but three of the last six victors (Estidkhaar - July Stakes, Too Darn Hot - Solario and Threat - Gimcrack) had won a pattern race on the previous outing. Estidkhaar and Threat were good enough to overcome a 3lb penalty for their Group 2 successes.

If you prefer to concentrate on pattern-race form, Glorious Goodwood has been the best marker. The winner of the Richmond Stakes (6f) or Vintage Stakes (7f) have fared well here though admittedly not for some time. Sri Pekan (1994) and Daggers Drawn (1997) followed up here after winning the Richmond Stakes over 6f whilst Alhaarth (1995) and Lucky Story (2003) took the Champagne Stakes straight off the back of landing the Vintage Stakes (7f). the 2017 winner, Seahenge, also contested the Vintage Stakes where he was back in fifth. Winning form at 7f has been preferable with 12 of the last 16 winners having done so beforehand.

Godolphin have won four of the last 1 runnings (and supplied the second and third in 2016 and last season’s runner-up) and they would also have bagged three more wins between 2000-2002 but for Sheikh Mohammed’s policy at the time to have his two-year-olds in training with David Loder who saddled Noverre (Godolphin silks), Dubai Destination (Sheikh Mohammed silks) and Almushahar (Hamdan Al Maktoum silks) so be in no doubt that this operation has a soft spot for this prize, as it does the fillies’ equivalent race at this meeting, the May Hill.

The Hannon stable won the 2011, 2012 and 2019 runnings with Trumpet Major, Toronado and Threat having also won the 1986 edition with their 2000 Guineas winner, Don’t Forget Me, so their entries should also be noted. Sir Michael Stoute surprisingly doesn’t target this Group 2 event, maybe as his best 2yos tend to have their debut late in the season, hence he has saddled only three runners in this contest in the last 30 years. However, all three placed with two finishing second so take note in that eventuality. John Gosden twice won this Group 2 contest in the 1980s but his subsequent six runners have failed to place until Too Darn Hot won two years ago.